Fifty nations met in San Francisco in 1945 and formed the United Nations to protect and promote peace.
World War II had raged from 1939 to 1945, and as the end drew near, cities throughout Europe and Asia lay in smoldering ruins. Millions of people were dead, millions more were homeless or starving. Russian forces were closing in on the remnants of German resistance in Germany’s bombed-out capital of Berlin. In the Pacific, US Marines were still battling entrenched Japanese forces on such islands as Okinawa.

In April 1945, delegates from fifty countries met in San Francisco full of optimism and hope. The goal of the United Nations Conference on International Organization was to fashion an international body to promote peace and prevent future wars. The ideals of the organization were stated in the preamble to its proposed charter: “We the peoples of the United Nations are determined to save succeeding generations from the scourge of war, which twice in our lifetime has brought untold sorrow to mankind.”

The Universal Declaration of Human Rights (1948) The Universal Declaration of Human Rights has inspired a number of other human rights laws and treaties throughout the world.
By 1948, the United Nations’ new Human Rights Commission had captured the world’s attention. Under the dynamic chairmanship of Eleanor Roosevelt—President Franklin Roosevelt’s widow, a human rights champion in her own right and the United States delegate to the UN—the Commission set out to draft the document that became the Universal Declaration of Human Rights. Roosevelt, credited with its inspiration, referred to the Declaration as the international Magna Carta for all mankind. It was adopted by the United Nations on December 10, 1948.

In its preamble and in Article 1, the Declaration unequivocally proclaims the inherent rights of all human beings: “Disregard and contempt for human rights have resulted in barbarous acts which have outraged the conscience of mankind, and the advent of a world in which human beings shall enjoy freedom of speech and belief and freedom from fear and want has been proclaimed as the highest aspiration of the common people...All human beings are born free and equal in dignity and rights.”

The Member States of the United Nations pledged to work together to promote the thirty Articles of human rights that, for the first time in history, had been assembled and codified into a single document. In consequence, many of these rights, in various forms, are today part of the constitutional laws of democratic nations. 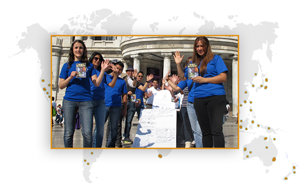